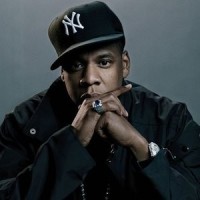 Jay Z co-owns the New York 40/40 Club sports bar, and is the co-creator of the clothing line Rocawear.[17] He is the former president of Def Jam Recordings, co-founder of Roc-A-Fella Records, and the founder of the entertainment company Roc Nation. He also founded the sports agency Roc Nation Sports and is a certified NBA and MLB sports agent.[18] As an artist, he holds the record for most number one albums by a solo artist on the Billboard 200 with 13.[19][20] He has also had four number ones on the Billboard Hot 100, one ("Empire State of Mind") as lead artist. In 2009, he was ranked the tenth-most successful artist of the 2000s by Billboard as well as the fifth top solo male artist and fourth top rapper behind Eminem, Nelly, and 50 Cent.[21] He was also ranked the 88th-greatest artist of all time by Rolling Stone.[22]